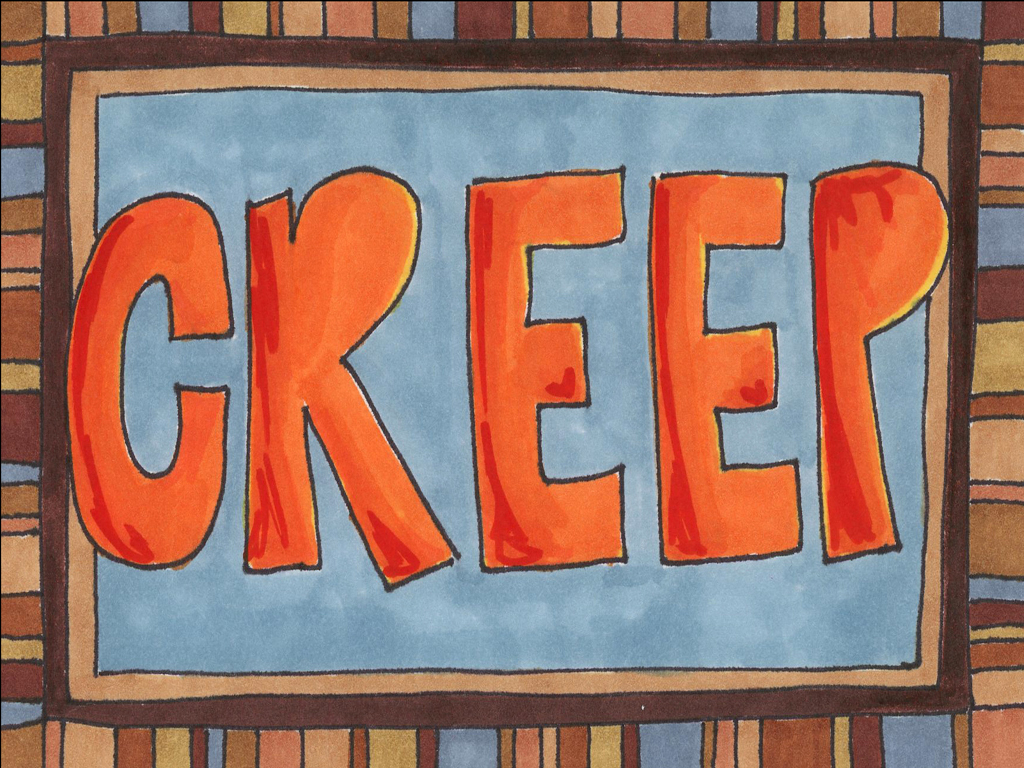 I have to admit that sometimes even I worry about how our totally random verb selection for DO52™ produces words so unlikely that others will consider them unusable.

“Creep” was one of those verbs for me. When fate put it in the mix, it was with half-hearted excitement and enthusiasm that I accepted its place among the fifty-two curated verbs for the year. Other people were all to willing to agree and reinforce my insecurities about allowing this verb in, but eliminating it based on personal preference was testing fate in way I was not comfortable doing. So it stayed.

And boy I am glad, because something amazing happens when you stop trying to control the world around you and, instead, grant the universe permission to take you where you need to go.

I drew the verb CREEP on Monday morning and, yes truthfully, I sighed with disappointment when I saw it.

Then on Tuesday morning, after eating dinner out with a group of girlfriends the night before, I found a Chinese fortune sitting atop my keyboard. Realizing the boys must have ordered Chinese food for dinner, I smiled at the idea that one of them left me their fortune.

It read, “Someone in your life needs a letter from you.“

Who left it? Without a signature of some sort, how was I to know which of them needed a letter from me?

Not knowing which boy thought they needed a letter was all the invitation I needed to stop what I was doing and to write each of them their own. I quieted my mind long enough to imagine what Matthew, Jack, and Richard most needed to hear from me at this point in our relationships and to craft heartfelt letters filled with exactly those sentiments.

Aaahhh… but then, out of the corner of my eye, I saw my DO52™ stick with the verb, CREEP staring back at me and immediately I realized why that verb found me that week.

I was supposed to have fun with the letters I wrote. I waited for all three of them to be out of the house, so I could creep around hiding each envelope in a different spot. I had fun picturing the three of them moving through their weekend and imagining where I could place their letters so they would not only be surprised, but also so they would be alone when they found it.

What started out feeling like a disappointing verb ended up being providing some of the most fun I have had all year.

That, my friends, is the magic of DO52™. Want to join the fun? Click here to get your own set.

8/21/19 Today is installment number two in a four-part series on the role self-awareness plays in helping us shine brighter. The focus of today is Habits. Last week Katie asked me a series of questions during... Read More »

6/21/16   I find that sometimes the role of the weekly DO52 verb is to realign me; to shed light on a priority that I have let fall by the wayside. Other times the verb jolts... Read More »

3/21/16 I find the DO52™ experience to be a little like opening a treasure box. There is always an element of surprise to what awaits you, but it is almost always guaranteed to be good. Maybe... Read More »

5/14/15 DO52™ is an adventure and like most adventures that means it is unpredictable and that now two outcomes are ever exactly the same. All you have to do to participate is decide that each of... Read More »

4/28/15 It's time. I am a little embarrassed to admit what I am about to share, but in the spirit of believing that each of us is on our own journey to shine, I decided it... Read More »