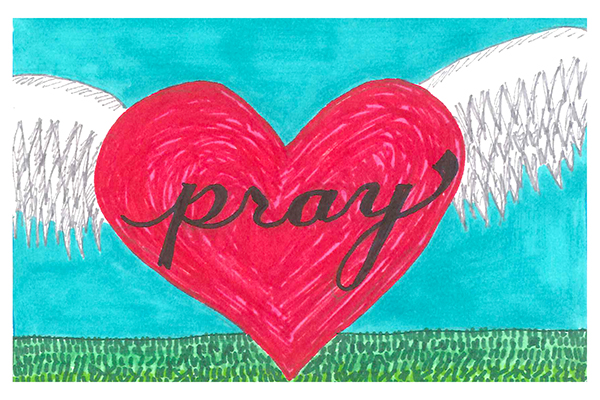 Maybe I was praying no one would notice if I shared my DO52 post this week.

Those who have known me for a while know that I have a curious relationship with organized religion. Honestly it dates back to the fourth grade when my loving parents moved me from a public school to a parochial school, because classes were smaller and I had been recently diagnosed as dyslexic.

On my very first day of reporting to Ms. Jahoda's class, she immediately tried getting me acclimated by involving me in what-just-so-happened to be the middle of Religion class. “Claudia, why don't you tell the class what a 'pew' is?”

Unless of course your mother is Catholic and your father is Jewish and, up to that point, you had never spent a single moment attending a religious service of any kind.

Then it's panic. Sheer panic, because you're twelve years old and sure that 100% of the eyes in class are watching you. And all you really want to do is fit in. The months and years that followed weren't easier, because, like clockwork, they included First Friday masses where every kid in the class stepped over you in order to get to the alter where they received communion.

My image of religion and all things associated with it – like praying – was that it's inaccessible and meant for people who officially had membership into the “club”.

My feelings over the years have softened, due to meaningful interactions with trustworthy and upstanding people who embody so much of what I imagine organized religion to really be about. But still, my participation with religion isn't formal or organized.

What's interesting, though, is this: I find that the closer I get to understanding and living my purpose, the more spiritual I am becoming as a person. Maybe it's because I can't imagine how else to explain some of the opportunities that have come my way or maybe it's because the deeper I get into grappling with this path I am taking, the more guidance I find myself seeking.

I have conversations with who I imagine God to be. I don't know if that constitutes praying in the eyes of those who have far more experience than I do, but I usually end up feeling better than when I started. And I imagine a sense of peace is a big part of what God wants us to feel.

I actually consulted with God about how to use last week's verb, PRAY, and the first thing that came to mind was sharing my story.

I don't know why

and I spent the rest of the week looking for a way out,

but here I am three days late and finally sharing it, so I can finally move on to this week's verb, CELEBRATE!

3/16/15 Selecting the verb FIGHT might have been considered less than lucky, the evening before beginning spring break with your family. Unless of course, like me, the days leading up to your spring break were chock... Read More »

3/2/15 DO52 sticks are invitations to do or see things in new and different ways; ways that gently nudge you towards being the kind of person you aspire to be. Like on Thursday when I shared... Read More »

2/16/15 At 4:51 last Monday morning my first interaction with the verb, CONNECT, presented itself. Long-time friend, Kim, emailed me to see if we could connect for lunch one day in the upcoming weeks. Later that... Read More »

2/9/15 Some critics will say my performance with this week's DO52™ verb, PERFORM, was poor; that it lacked a plot and was void of all drama. I’d have to agree. Early in the week I tried interpreting... Read More »

2/2/15 Eeewww… Some weeks my encounter with DO52 is less fun than other weeks. Surprisingly, last week was one of those bitter pills to swallow; something my soul knew I needed, but that certainly didn't feel... Read More »