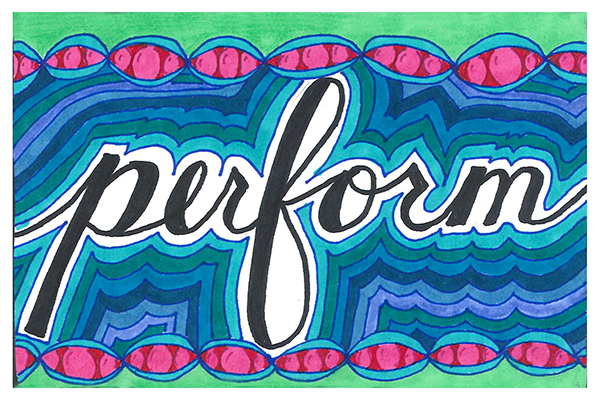 Some critics will say my performance with this week's DO52™ verb, PERFORM, was poor; that it lacked a plot and was void of all drama. I’d have to agree.

Early in the week I tried interpreting the verb literally and thought about purchasing tickets for my family and me to attend a performance. That didn’t work.

Minutes before sitting down at my computer, I realized I could have used it to perform a random act of kindness or a senseless act of beauty. And, while I still might do that, for the purposes of this week’s post, the idea came too late.

I even played and replayed interactions I had with people last week, trying to catch myself having performed; having said or done something that was either staged or rehearsed or that left that me feeling like I was acting. I really couldn’t think of anything.

That’s when the villainous verb of the week actually turned hero. The twist in plot helped me realize that my lack of performance might actually be one of the reasons I shine. Because I’m far more natural at being authentic than I am at acting.

Thumbs up or thumbs down, the curtain has fallen on another week of DO52. Tune in next week when CONNECT takes center stage.

9/25/15 Part of the fun of discovering your shine is realizing all the many ways you can share it with the world. Shine, as defined by the House of Shine, is the point of intersection between... Read More »

3/31/15 Maybe I was praying no one would notice if I shared my DO52 post this week. Those who have known me for a while know that I have a curious relationship with organized religion. Honestly... Read More »

3/16/15 Selecting the verb FIGHT might have been considered less than lucky, the evening before beginning spring break with your family. Unless of course, like me, the days leading up to your spring break were chock... Read More »

3/2/15 DO52 sticks are invitations to do or see things in new and different ways; ways that gently nudge you towards being the kind of person you aspire to be. Like on Thursday when I shared... Read More »