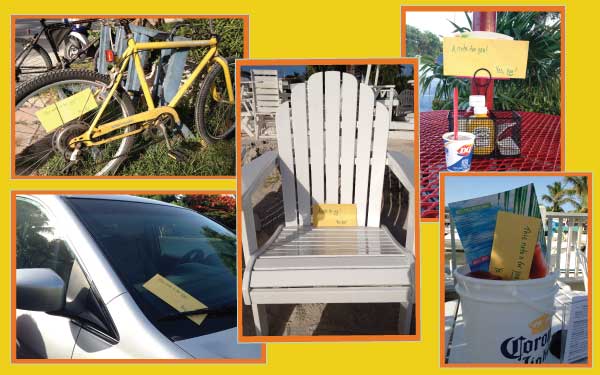 When I was a young professional my mother mailed me a New York Times article about Neil Rudenstine, the man who, at the time, was serving as president of Harvard University.

The article was titled, The Power of a Note and left such an impression on me that I frequently still reference it when conducting workshops.

Rudenstine told of how he purposefully carved time each week to write notes of gratitude and appreciation. I remember thinking at the time that, if the president of a university can make time to write notes of recognition then certainly I can too.

And I know you're busy, but you can too.

Last week my family and I channeled our inner-Rudenstine. We wrote anonymous letters of encouragement and then sealed them in yellow envelopes which we then delivered up and down the island of Key Largo. We had so much fun on our adventure that, I am hoping if I share some highlights you might be inspired to jump in on the fun.

Notes were simply made – white paper and Crayola markers. We wrote things such as:

“You were meant to shine. Go forth and make a contribution!”

“Thank you for making a difference in your corner of the world. We need you.”

“You matter. Thanks for sharing your talents with the world.”

We made ten notes in all.

Then we hopped in the car and made an adventure out of deciding where to leave them.

We left one in the spokes of a yellow bicycle

and Jack wanted to discreetly leave one on the table next to us, in the plastic tub holding condiments.

after we finished with the other four,

I suggested the perfect place might be the outside seating at our local Dairy Queen.

That, is of course, after we went inside and rewarded our good deed with a round of ice cream cones for everyone.

Posted on 6/26/13 10:00 am by Claudia Beeny in: Inspiration,Yellow Envelope Project
View Comments 0

10/5/10 Seldom, when your are trying to shine, does it pay to take short cuts. Last year on September 26, I was walking at Parr Park with a friend.  She was indulging me by listening, while... Read More »

10/4/10 An Open Letter to the Community at House of Shine: Thank you.  One year ago this week I asked you to send a letter in a yellow envelope to a woman named Pat.  The idea... Read More »

7/26/10 Last week I facilitated leadership training and Joan of Arc came up.  A woman in the group told of a story she read by author, Tim Elmore.  She explained that, in his story, Elmore recanted... Read More »

7/6/10 What would shine look like if you could capture it in a picture? This picture, that I recently took at a local park, comes pretty close to describing what shine might look like for me. ... Read More »

6/29/10 There was something else that shined about the trip Richard and I took to Louisville last weekend. My former boss was celebrating his 60th birthday and his wife arranged a large party of family and... Read More »

5/28/10 When I returned home the other night Richard and the boys were already asleep.  All the lights were out except one under the hood of the oven.  The house was dark, quiet and even a little... Read More »